Dan Gohr was born and raised “inside the beltway” in Washington DC and considers himself a Washingtonian. He is a graduate of Parkdale High School in Riverdale, MD. 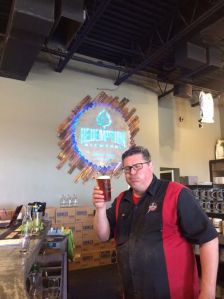 After high school he attended community college and worked for his father’s remodeling company.

Gohr found beer early in his life starting with Coors Light and Busch Light, moving to Molson and Moosehead, before winding up with Bass and Guinness. He and his pals discovered that you could brew your own beer. They went to the homebrew shop in Rockville, MD, called Brewmasters. A brew kit was purchased and brewed during the 1992 Winter Olympics. The group called this first brew Bobsled Brew in honor of the Jamaican bobsled team. The brew took place in a condo overlooking the Capitol owned by a sister of one of his buddies. She had moved out and the group of “hooligans” took it over to do their brews.

Gohr got into more advanced home brews, beginning to develop his brewing skills. He was hired on as an apprentice at Brimstone Brewing Company in Baltimore. After three years at Brimstone, he travelled to Chicago where he earned a Brewmaster’s Certificate at the Siebel Institute. At Siebel a job was posted for a brewer at a startup brewery in Green Bay, Wisconsin. Gohr interviewed for the job as did three other Siebel students. He got the job. The Green Bay brewery (Egan Brewing Company) paid his moving expenses from the east coast to upper Wisconsin. After a couple of years he got bored living in such a rustic setting and headed back to the east coast. He remained close to the Egans and currently has a tribute brew called Egan Stout on tap at his current gig, Redemption Alewerks. 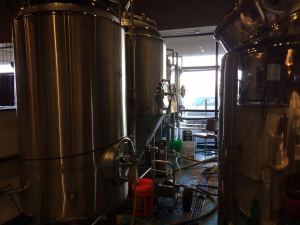 Meanwhile back on the east coast, Gohr went to work for Clipper City Brewing Company in Baltimore brewing the Heavy Seas Beer. After a couple of years, he moved on to Old Dominion Brewing in northern Virginia. Growing weary of the nomadic life he had been living as a brewer, Gohr returned to school at the University of Maryland and completed his degree in history.

Making a move to Indiana and securing a position in the history department at Noblesville High School, Gohr taught history for three years. Although he loved the teaching, he tired of the administrative burden and bureaucratic nonsense involved. It was time to get back to brewing. He got a job with Cavalier Distributing selling craft beer which enabled him to make numerous contacts in the brewing business who recognized his deep resume as a brewer. One of these contacts was about to open Redemption Alewerks and asked Gohr to come on as head brewer. He accepted the job and continues at Redemption today.

When asked what his favorite part of the brewing process might be, Gohr responds, “going home.” He says that when he hired his assistant he knew that it would screw up his plan for burning calories.

Gohr cannot say that any one of his brews is his all time favorite. However, he is quick to

name the Atonement APA now being poured from tap #1 at Redemption. He likes the balance of the malt and hops in this brew. There is no one best seller at Redemption. There are at least four brews that compete for that spot. The first brew he made at Redemption was the Genesis Milk Stout. The name speaks for itself.

Asked about any special brew he has done, Gohr recalls a collaboration Redemption did with Shorts Brewing Company of northern Michigan. It was a Belgian tripel dubbed Me Love You Triple Time brewed with basil, lemon grass, and ginger. The name, of course, is a play on words from the dialogue in the movie Full Metal Jacket.
As far as someone getting into the brewing craft, Gohr suggests there are two paths. One path is knocking on doors and sweeping floors until a brewer lets you in and brings you along, learning as you go much like an old school apprenticeship. The other is to go to school and get formal training.

Gohr misses teaching but not the politics of the system. He remains fascinated by history and continues to dabble in it in his spare time. Gohr is the reigning Indiana’s HopModel having topped other entrants last year in the catwalk competition sponsored by Indiana on Tap and Nuvo. He will be defending his title on April 28th in the Egyptian Room at Indy’s Old National Center. Regardless of the outcome of this year’s event, Dan Gohr will be continuing to brew up an awesome variety of beers at Redemption Alewerks for the foreseeable future.